This past summer, BRP once again sponsored an event to bring together a host of government agencies and local organizations who have strong interests in preserving the river. The Brule River Coalition was formed a few years ago as a forum to share management programs and research projects to insure everyone communicates and knows of each other's interests.

In the process, we identified one of most serious threats to the river....the potential collapse of the abandoned South Shore Railroad Grade over Nebagamon Creek. The former travel route, via rail used by visitors in the 1880's to the Winneboujou Station has been slowly deteriorating over the past 100 years. Should the culvert and embankment collapse it would severely impact the spawning and fisheries to the Nebagamon Creek, Brule, various tributaries and eventually, Lake Superior. Therefore, with the help of the DNR a plan is being developed to eliminate the railroad grade and culvert to insure silt and sedimentation does enter the waterway.

Prior to the earth work, we will prepare the site by surveying and staking the property lines, installing erosion controls such as silt fences, and installing construction fencing and signage. Initial earth work will consist of removing trees along the grade’s slopes. We will then excavate approximately 30,000 cubic yards of fill material (generally sand, gravel, and clay), generally from east to west. DNR operations personnel from the Spooner office will operate either rented or DNR-owned heavy equipment, including an excavator, tracked dump truck, and a bulldozer. I will be talking with the crew soon to plan the actual sequence. The fill material will either be transported to and used on nearby road surfaces, placed in area gravel pits, or disposed of in other local upland areas. I am still working on procuring large dump trucks to transport the material off-site.

After removing most of the fill material, we will excavate a new stream channel several feet to the east of the existing channel. This will be done in the dry and will include placing in-channel grade controls such as cobble/boulder riffles to minimize upstream headcutting. Once we complete the new channel, we will divert the stream into the new channel and allow the existing channel to run dry, after which we will remove the remaining fill and concrete culvert and wingwalls. Working in the dry in the new and old channels will minimize sediment runoff from the site. The site will be seeded and planted with trees after completing the earth work. We are also working with DNR Wildlife to plan conservation/protection strategies for Wood Turtles.

Click on any image below to view gallery and description of each picture. 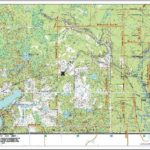 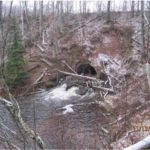 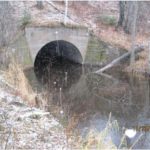 1 Culvert collapses or is completely blocked

1 The flood will wash away the Afterhours road crossing

1 This sand slug may take decades to move down the river before it reaches Lake Superior 1 As the sand slug moves it will fill holes, cause channel widening(bank erosion) and sequentially bury trout habitat and destroy spawning areas

This potential threat must be eliminated as soon as possible! We suspect that if a landowner or responsible party has not been discovered in five years that we may need to take action in other ways.